To Empower and Protect Open Dialogue

Since being founded in 2011, ArchiveSocial’s first-of-kind cloud-based archiving and analytics technology has been trusted by thousands of organizations including New York City, the National Archives and Records Administration, the State of North Carolina, and the United States Department of Justice to empower their active participation on social networking channels without concern of being unable to fulfill record requirements and avoid lawsuits. In 2017, ArchiveSocial collaborated with the White House to launch the first archive of presidential social media in history for the outgoing Obama administration. Culture is more than happy hours, team lunches, and a stocked break room. (But don’t worry, we do those things, too.) At ArchiveSocial, we celebrate our culture and values every day. We treat your work anniversary like it’s your birthday — and enthusiastically celebrate both. We acknowledge the exceptional work of the team with our five peer-nominated core value awards. We give back to our community by donating our time or smashing whipped cream pies in our faces to raise money for a local organization. We tell jokes. There’s even a team dedicated to keeping the laugh in work-laugh balance. Total Optimization of Digital Communications and Record Retention
ArchiveSocial has joined forces with NextRequest and Monsido. Learn more about these powerful products, and the advantages of bundling them with ArchiveSocial!
Read All About It 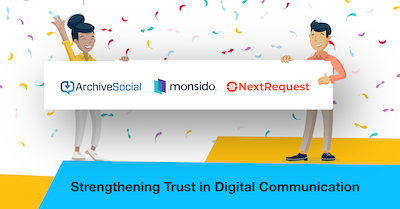 Check out our job postings and get your smiling mug on this page.

If you are interested in joining one of the smartest, most fun-loving teams in Durham, get in touch with your resume.