§ 402. Definitons
3. Public records.  The term “public records” means any written, printed or graphic matter or any mechanical or electronic data compilation from which information can be obtained, directly or after translation into a form susceptible of visual or aural comprehension, that is in the possession or custody of an agency or public official of this State or any of its political subdivisions, or is in the possession or custody of an association, the membership of which is composed exclusively of one or more of any of these entities, and has been received or prepared for use in connection with the transaction of public or governmental business or contains information relating to the transaction of public or governmental business, except:
A. Records that have been designated confidential by statute;[1975, c. 758, (NEW).]
B. Records that would be within the scope of a privilege against discovery or use as evidence recognized by the courts of this State in civil or criminal trials if the records or inspection thereof were sought in the course of a court proceeding; [1975, c. 758, (NEW).]
C. Legislative papers and reports until signed and publicly distributed in accordance with legislative rules, and records, working papers, drafts and interoffice and intraoffice memoranda used or maintained by any Legislator, legislative agency or legislative employee to prepare proposed Senate or House papers or reports for consideration by the Legislature or any of its committees during the legislative session or sessions in which the papers or reports are prepared or considered or to which the paper or report is carried over; [1991, c. 773, §2(AMD).]

The Maine Right-to-Know Advisory Committee is an advisory council created by the Maine FOAA. The Citizens Guide to the Freedom of Access Act emphasizes the importance of the public’s right to access government open records and the intentionally broad nature of the Act. The document clarifies that the FOAA includes “electronic data with information” used in relation to government business. Under this interpretation, social media records in Maine qualify as a public record.

The public’s right to information about government activities lies at the heart of a democratic government. The Maine Freedom of Access Act (“FOAA”) grants the people of this state a broad right of access to public records while protecting legitimate governmental interests and the privacy rights of individual citizens. The act also ensures the accountability of the government to the citizens of the state by requiring public access to the meetings of public bodies. Transparency and open decision-making are fundamental principles of the Maine Freedom of Access Act, and they are essential to ensuring continued trust and confidence in our government.

Open government is good government and the state is committed to ensuring and protecting your “right to know.”

Requesting a Public Record: The Basics:

What exactly IS a “public record?”

A public record is:

The Town of Whitefield, Maine has a comprehensive social media policy. The policy clearly states that social media content is governed by the Maine Freedom of Access Act as a public record and is subject to public disclosure. This policy serves as a model for managing social media records in Maine.

Excerpt from the Town of Whitefield Social Media Policy

9. The Town of Whitefield social media sites shall adhere to applicable federal, state and local laws, regulations and policies.

11. Comments on topics or issues not within the jurisdictional purview of the Town of Whitefield may be removed.

The State of Maine’s Office of Information Technology also offers a policy for using social media for state business. The policy states that social media contents are subject to the State’s Records Retention Law and Freedom of Access Act, and offers additional guidance on Maine government social media records.

5.7 All posted material is public record. The Agency must institute a process to save and retain all postings, outgoing and incoming, in accordance with the State’s Records Retention Law. This requirement applies regardless of the form of the record (digital text, photos, audio, video, etc.). Agencies shall not rely upon the Social Media provider’s in-house policies for this purpose. 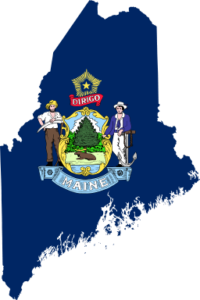