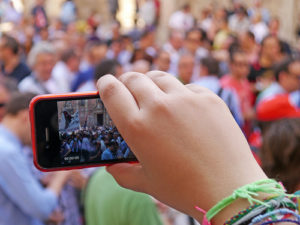 Where is the first place you read breaking news? More often than not, it is on social media. Social media has significantly changed how news is disseminated, making it more instant and interactive. Additionally, the likes of Twitter and Facebook have actually shaped and created the news as well. Consider the Iranian elections and the Egyptian revolution. However, according to an academic paper titled “Losing My Revolution: How Many Resources Shared on Social Media Have Been Lost?” by Hany SalahEldeen and Michael Nelson of Old Dominion University, such culturally significant events are fading fast from social media. Demonstrating the need to archive this culturally significant data in lieu of it being lost, this study also suggests that there is a similar fate for the more quotidian posts.

Be archived or be erased

According to SalahEldeen and Nelson’s study, there was a nearly linear relationship between the time since a social media post and the percentage of such related posts being lost and unrecoverable forever. Using six culturally significant events as proxies, they measured the proportion of related posts that were publicly archived, as well as the proportion that had disappeared completely. The study revealed grave statistics for historians and cultural archivists. After one year, only about 20% of the posts surrounding these culturally significant events were archived, while 11% of the posts had been lost forever. After two and a half years, the archived level rose to 41%, while the level of erased social media posts had risen to 27%.

So, although more social media posts concerning historically significant events are archived over time, the levels of these posts that are lost are increasing as well. In fact, the two researchers estimate that we lose .02% of social media posts every day. For historians and cultural curators, losing a quarter of their records after just two and a half years represents a significant loss of knowledge. Additionally, 32% of the social media posts had not been archived or deleted after two and a half years, meaning that it was sitting on Facebook or Twitter servers and at the mercy of the account owners. Understandably, social media is a very decentralized and granular entity, making the finding and archiving of relevant records difficult. Nevertheless, the loss of culturally significant records damages our historical accounts, especially because social media is not only spreading news, but making it.