Law enforcement is embracing social media. Not only is it a way to disseminate large amounts of information to citizens, but it really does influence the public’s perception of a department.

In an effort to give some insight into the realities of policing and to bring awareness to Palo Alto’s social media channels, Police Chief Dennis Burns live-tweeted his 13 hour shift on the Palo Alto Police Department’s Twitter account.

The highlight of the night? When Chief Burns pulled over a car balancing a mattress on the roof, secured only by the hands of the driver and the passenger. With coverage in publications like Mashable and CNET, Seattle PD is literally a force to be reckoned with when it comes to social media.

Their police blotter reads like a blog, with catchy headlines and often entertaining posts. Tweets by Beat provides twitter feeds of police dispatches in each of Seattle’s 51 police beats—a veritable police scanner for the twitter generation.

Example?  Each Friday they post a picture and invite fans to “beat the caption.” 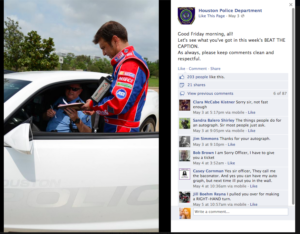 Another cool feature?  They have a Podcast.

Kansas City, Missouri has been testing the waters of the Gov 2.0 movement for some time, and its police department is no different.

On his official blog, Kansas City MO Police Chief Darryl Forte announced in March 2012 that his department was one of the first in the nation to have an official Pinterest account.

The department has 43 boards and over 1,100 pins covering a wide variety of topics including missing persons, cool police vehicles, and the fuzzy friends (dogs and horses) that are on the job.

Check out what we found on the board titled “OOOOPs,” board, which showcases the humorous moments caught by officers dash cams:

These 4 departments are taking civic engagement to a whole new level by using social media to connect with residents.

Though they are some of our favorites, we know that there are others out there.

What are some of your favorites?