Hashtags are powerful tools for creating and tracking conversations about everything from planned events to emergency response, but they can occasionally go haywire. When celebrities find themselves in hashtag firestorms [see: Robin Thicke (#AskThicke) or Jenny McCarthy (#JennyAsks)] the old saying “there’s no such thing as bad publicity” may still hold true. For brands and public agencies, however, it’s important to have a strategy in place to avoid long term reputational damage when hashtags go awry.

In this week’s installment of Twit Happens, we’ll demonstrate how one public agency, the NYPD, successfully reined in a hashtag gone wild.

The campaign quickly backfired when Twitter users began to share photos of alleged police brutality instead. As is often the case with Twitter, the negative images went viral as users created captions to highlight and poke fun at the department’s past transgressions. 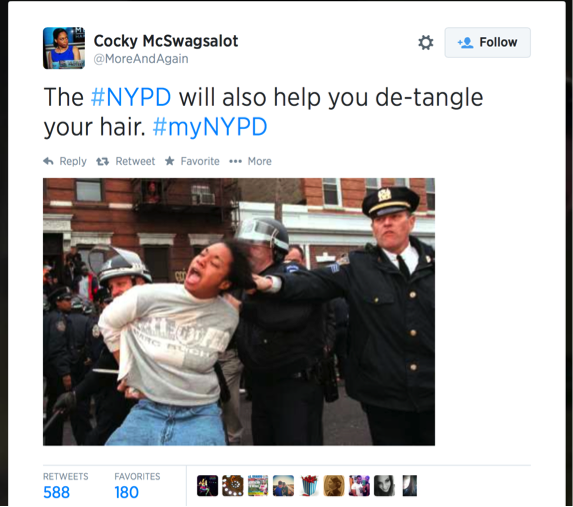 NYPD’s simple hashtag idea turned into a public relations disaster. #MyNYPD became a trending topic on Twitter, and the anti- police sentiment spread to other major cities including Los Angeles, Seattle, and Austin. The mainstream media soon picked up on the story and continued to add fuel to the fire until soon the entire country knew of the NYPD’s debacle. Not only did the negative reaction on social media serve as an embarrassment to a well-intentioned campaign, but it was also a disheartening experience for the countless police officers that have dedicated their lives to making a positive impact in their communities.

Although the NYPD received significant criticism for the #MyNYPD campaign, it is instructive to understand the way in which they responded. Specifically, New York Police Commissioner Bill Bratton made it clear that he “welcome[d] the attention”, because it allowed them to receive feedback from the public and have an open conversation about perception of the police department. He also pointed out that the negative photos were largely “old news.”

As demonstrated, perhaps the best way to deal with an unexpected reaction to a marketing campaign is to first accept the reaction. You can then decide if it makes sense to suspend the campaign, and perhaps even embrace the conversation to potentially steer it in a more positive direction. Commissioner Bratton was able to turn the hashtag disaster into a learning experience for the department, and used it to distance the current police department from past.

The takeaway here is rather than try to ignore negative fallout, you can acknowledge it publicly and use the opportunity to emphasize the continuous improvement of your organization. By remaining honest and facing the negative press head-on, Bratton and the NYPD helped to preserve their audience and the ongoing relationship between their organization and the public. Social media is increasingly vital to maintaining this relationship, and organizations like the NYPD should continue to work on becoming part of the conversation.

Next in the series: Failure to Communicate

Next week in our Tweet Regret series we’ll discuss the dangers of not getting information out fast enough with our post “Failure to Communicate”.

Don’t want to wait? You can read a more detailed analysis of all five common Twitter mistakes in the eBook “Twit Happens — Tweet Regrets in the Public Sector”

Get the Twit Happens eBook

Has this happened to you? You’re not alone! Share your own stories of Twitter regrets and rockstar recovery in our comments section or on our Facebook page.