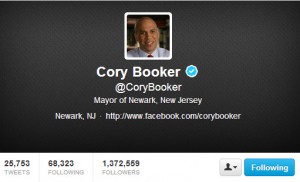 Last week’s South by Southwest (SXSW) Conference handed Cory Booker a hugely influential mic with which to share his ideas. The thing is, Booker didn’t need it. A strong believer in an accessible government, Booker’s support of social media goes far beyond just broadcasting its benefits like he did at SXSW. In fact, he is the principal example of government engagement in action. Booker’s Twitter account boasts over 1.3 million followers and almost relentlessly engages with citizens. So, while Booker’s dialogue at SXSW aimed to teach by lecture, his social media presence teaches by example. And, says Booker, many government officials and agencies could learn a thing or two.

Speaking from his social media experience at SXSW, Booker highlighted some key lessons. First, Booker made an important distinction: there is a difference between being online and being social. Almost all politicians and government organizations are on social media. But simply having a profile isn’t enough. Officials need to connect with their citizens if they truly wish to serve effectively. An undeveloped Facebook page is the equivalent of a business card – impersonal and easily forgotten.

A crucial extension of this conviction about social media engagement led to one of the most quotable moments at SXSW. Lamenting how government officials treat Twitter like megaphone, not a conversation,  Booker stated that officials are “just using it as an announcement system, like you used to listen to in class: ‘The cafeteria will be serving roast beef, and I will be at this place or that place.’” Booker sees social media as an invaluable tool for a two-way dialogue. So, while the Newark mayor stole the show speaking at SXSW, he was probably excited to exchange the mic for his Twitter handle when the convention wrapped.