Social media has developed a negative connotation fueled by scandal and frustrations. It doesn’t have to be that way! Social media can be a vibrant tool for uniting the community. By promoting success and encouraging engagement, social media is quickly becoming the best tool for keeping your community invested in the district’s success. 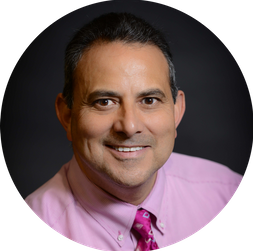 Dr. Roland Rios
Director of Technology, Ft. Sam Houston Independent School District
Dr. Roland Rios currently serves as the Director of Technology for the Ft. Sam Houston Independent School District. During his nearly 30 year career in education, he has been a math teacher, high school assistant principal, and middle and high school principal. He also serves as Past President of the Texas Computer Education Association. In 2012, he was named the “TCEA Technology Administrator of the Year” for Texas and was also named one of TechSmith’s “20 to Watch in Educational Technology” for the U.S. When not enjoying time with his family, Roland enjoys performing community service, taking photos and playing the guitar and ukulele really badly. You can follow him on Twitter at @drrios.