Can Fire Departments Use Social Media? 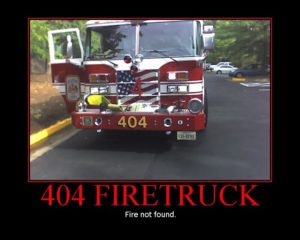 Hazing incidents inside fire stations have gone viral on YouTube, patients privacy rights and HIPPA regulations have been violated when pictures are posted on firefighters personal accounts, and there is no shortage of examples of firefighters posting pictures of themselves doing — shall we say — “unbecoming” things while in uniform.

The number one priority for fire service leaders should be creating a social media policy.

Curt Varone, a career firefighter, practicing lawyer, and the Director of the Fire Service Division of the Legal & Liability Risk Management Institute, is the go-to guy for social media law in fire agencies. He’s written over 100 social media policies for fire departments across the country. In New Hampshire Town and City magazine, he outlined four key points that every social media policy should include:

It is also critical that fire departments, like other public entities, institute a record retention policy. Remember: social media is a public record. 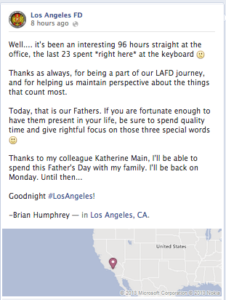 Of all of their tricks of the trade, we’re most impressed with how they’ve designated 3 points of contact (POCs) who, in addition to their other duties, work in shifts to man the social media accounts.

Followers get to know the firefighters as individuals — they often sign off on their Facebook posts and non-emergent tweets with their name or initials — and the system helps to ensure that the department’s message is centralized and controlled.

We want to hear from you!  What fire departments are you following on social media?