A Social Media Star is Born: The Mars Curiosity Rover

Although social media can feel like an entirely different planet for some, NASA’s Mars Curiosity Rover is undoubtedly right at home on Twitter. Since its perilous and celebrated landing on the red planet in the late hours of August 5, 2012, the Curiosity Rover has become a celebrity in scientific and popular culture through its extensive media exposure.  Not only has the Curiosity Rover helped keep NASA in the public eye as the space shuttles retired from flight, but, importantly, the Curiosity Rover’s use of Twitter has made science “cool” again.

Given the sobering challenge of sending the Curiosity Rover to Mars, one might expect that its social media presence might be similarly reserved. However, the Curiosity Rover’s Twitter account is out-of-this-world, pun intended. @MarsCuriosity has tweeted 1,803 times and has over 1.2 million followers. More importantly, it has a personality all its own. The Mars Rover has made pop-culture references to Jay-Z, Samuel L. Jackson, and CSI when performing experiments. It pokes fun at itself and posts as if it on vacation on Mars. In fact, the Mars Rover even checked in to the Gale Crater on FourSquare enough to become its mayor. It seems that the colonization of Mars has begun, at least in the social media sense.

Furthermore, by mixing humor and science, the Curiosity Rover has done just what its name suggests: stirring up curiosity in space and science. Using the humanizing features of social media, the Curiosity Rover has made science accessible to a new generation. Daily updates allow followers to see what the Mars Rover is up to, giving followers a sense of genuine involvement in the exploration of the planet. Coupled with its humorous tweets, it is cool again to follow the goings-on of a robot millions of miles away. So, by taking advantage of social media, NASA ultimately stoked interest and support for its agency’s projects and research while engaging with millions. It would appear the Mars has its first social media star. 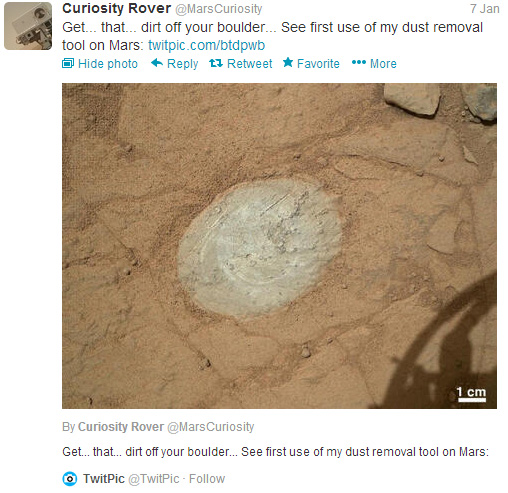