Through the Social Media Lens: #Inaug2013

On January 21st, President Barack Obama was inaugurated into his second term. And although a reported 1 million people braved the traffic and cold in Washington, DC, to see it in person, millions more took part online. Social media outlets, especially Twitter, saw a steady stream of posts related to the inauguration. 1.1 million tweets were posted just during the 90 minute ceremony, enough to cause disruptions and delayed service as inauguration-related posts peaked at 27,795 tweets per minute. This number dwarfed the 2009 inauguration peak of 3,210 tweets per minute. But it wasn’t just the quantity of tweets that surprised; the content also blew the 2009 inauguration out of the water. Demonstrating social media’s role in shaping how we share and experience events with others, those of us unable to attend the inauguration succeeded in taking part in the political, pop-culture, and patriotic festivities with just our thumbs and keyboards.

@WhiteHouse tweeted Obama being sworn in surrounded by his family, which garnered 1,726 retweets. Afterwards, @WhiteHouse asked its followers for their input on Obama’s inaugural address, retweeting nearly 20 citizens’ responses to over 3 million followers.

Even though the Inauguration Ceremony was held for Obama, Beyonce and Kelly Clarkson ruled social media. Beyonce’s rendition of the Star Spangled Banner (although now revealed to have been lip-synced), garnered 23,000 tweets before she even took up the mic. And after Kelly Clarkson sang “My Country ‘Tis of Thee,” she was able to steal a few moments with Beyonce herself. 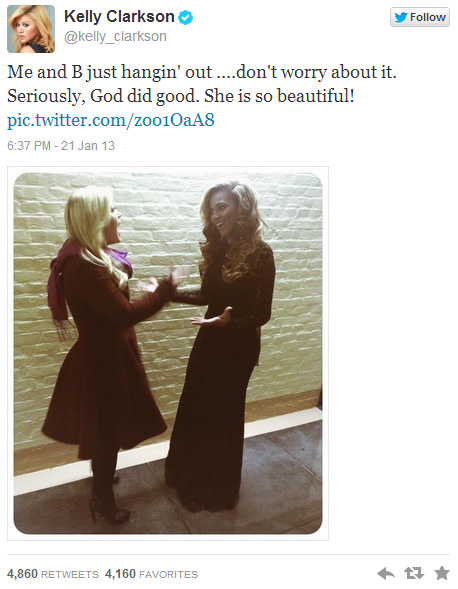 As a final view of what social media had to offer during the 2013 Inauguration Ceremony, @CNNPolitics tweeted this view of the National Mall, filled with red, white, and blue attire and flags. 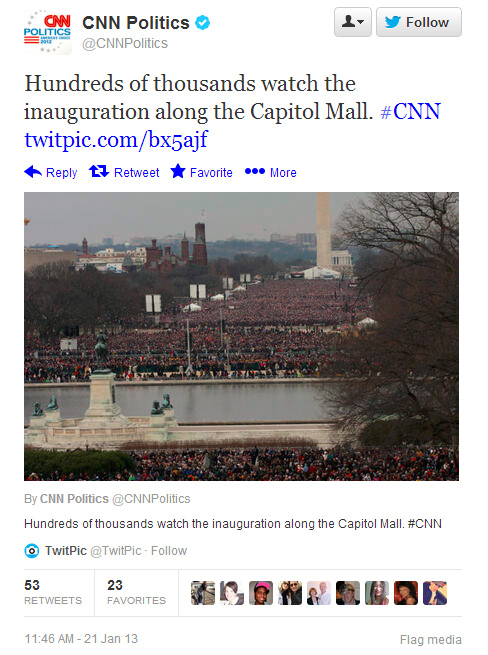