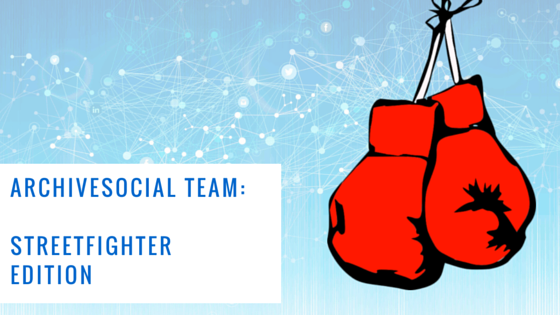 In this installment of the ‘ArchiveSocial Field Guide: A Who’s Who of Your Favorite Archiving Company’ we will be featuring not one, but two of our employees. Apparently we stepped up our recruitment game last fall and managed to land these two fine fellows on the same day. How efficient! In the spirit of that efficiency, we decided to pair off our Solutions Executive Bradley “FOTUS” Fouts and our Customer Success Manager Austin “my last name is badass enough” Spitler in a head to head interview for your entertainment.

We started off with a few softball questions about food, and FOTUS’ fighting spirit was quickly apparent. Spitler led us to believe we knew all we needed to keep him sated, and then he threw a curve ball that made us question everything we’d learned.

What is always in your refrigerator?

FOTUS: Gatorade, because maybe it will make me want to do a pullup.

Spitler: Always beer and maybe a citrus MATI. Never any food, except for maybe wings. So many wings.

Judges: Point goes to Spitler because MATI trumps Gatorade and FOTUS of all people should know that

What one food do you wish had zero calories?

Spitler: Wings. So many wings

Judges: This one would be a draw, but Parlor is right across the street and we could totally get on board with zero calorie ice cream. Point to FOTUS.

FOTUS: It’s Dames – because of the fiasco.

Judges: See? Just when you think you’ve got Spitler on the ropes, he surprises you with tapas. FOTUS, on the other hand, just hurls himself straight into the fray. He must be feeling feisty after all those times he’s thought about doing pullups. Point to FOTUS.

Now that everyone’s been fed, it’s time for some culture. In this round, we asked Austin and Bradley to share a little bit about their interests in literature, music, and travel. Prepare to be impressed by these young sophisticates.

Have you ever met a famous person?

Spitler: A few, but none of them were actually famous. Wait, does Bradley count?

FOTUS: Yes. Several. But no one you’ve ever heard of. Well, there was this guy named George W. Bush. I met him.

When they make a movie about your life, who will play you?

What is the last book you read?

Spitler: Kill Me, by Stephen White, but I didn’t finish it because it wasn’t any good.

FOTUS: Killing Reagan by Bill O’Reilly. I read a lot about presidents – both parties. I’m a bipartisan reader.

Judges: Should we be concerned that both of these books have “Kill” in title? No? Okay. Then point to Spitler for not wasting his time on a book he didn’t like, and a point to FOTUS for working both sides of the aisle.

What was the last thing you listened to?

FOTUS: Whatever was just on Pandora in the office. It was probably “Africa” by Toto. As usual.

Judges: This one is a tough call, so we’ll give it to Spitler because, well, Toto.

What is the farthest you have been from home?

Spitler: I lived in Malaysia for a year and a half as a child. I once rode my bike into the pool there, so my mom made me take swimming lessons with a mean old man named Mr. Lee who would dunk me if I cried. I guess it was effective, because now I’m a strong swimmer. Wait, what was the question again?

FOTUS: Do you need me to answer in nautical miles? Do you mean physically? Gosh. Probably Central America.

Once all of the boring stuff was out of the way, we decided to probe the depths of Bradley and Austin’s personalities to shine some light into the darker corners of their souls. Dust off your Psych 101 textbooks and dream dictionaries, dear reader, it’s about to get real.

Which is the scariest: werewolves, zombies, or vampires?

FOTUS: Zombies – they have some nasty disease! They’re gross. They’re nasty. They eat you and they stink, probably.

Spitler: Zombies, but only fast ones. They have no discretion. Vampires are creepy, but they are old and probably have a lot of interesting experiences to share. Werewolves are just… meh.

Judges: Draw. Neither of these two seem prepared for the zombie apocalypse, so no points awarded.

Would you rather be a tiny elephant or a giant hamster? Defend your choice.

FOTUS: Tiny elephant, because hot celebrity women would pay thousands of dollars for a tiny elephant, and a hamster would be shot for the meat.

Spitler: Tiny elephant. People would love me because I would be cute. Who hates a tiny elephant? A giant hamster would be terrifying. They bite and stink.

Judges: Spitler seems to have giant hamsters confused with zombies, so point to FOTUS.

How many five year olds can you take in a fight?

FOTUS: Can I grab a weapon? I’d say 10 because they are little and I’m smarter than them.

Spitler: At least a roomful. A small roomful. It could result in a Gulliver’s Travels situation if I’m not careful. Five is when they start going to school, learning things you never taught them, such as hand to hand combat. Of course, I’ve never raised a five year old so this is all just a guess.

Judges: This was a trick question, as we would never ask our employees to fight five year olds. That’s just wrong. Sick and wrong. What is wrong with these two? No points awarded.

And the winner is…

We learned a lot about Austin and Bradley today, and only got around to typing up some of it (what? we’ve got work to do). If you want to know all about Austin’s musical virtuosity (he plays four instruments!) and Bradley’s plans for yachting around the world (might explain why he thinks nautically) you’ll just have to ask them yourselves.

*Then the other man leaves. What were you thinking would happen? This is a ArchiveSocial, not Konami.