If you Fail to Plan, you Plan to Fail

What Social Media means for Public Officials after the Election 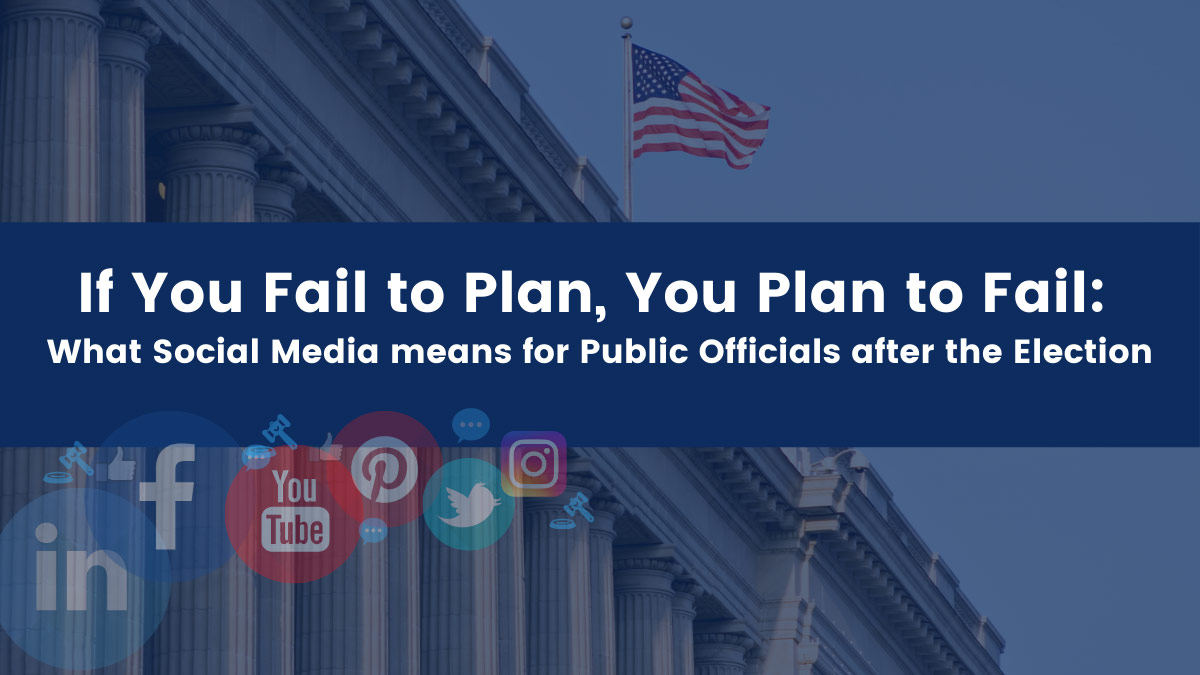 Social media is often deemed an easy, cost-effective way for public officials and those running for office to get out their message and establish an online presence that resonates with supporters, identifies would-be supporters and helps elevate their personal and professional brands. It connects them directly with the people who matter most, providing tools and functionality that both humanize and make them highly accessible to the voting public.

Because of its ease of use and very low barriers to entry, social media is oftentimes not recognized for its true power as a communications channel and the responsibilities and consequences that yields, particularly for elected officials. The primary focus on social media by almost all users, including businesses and brands, is the opportunity. Elected officials must go beyond that and consider the opportunity cost.

When it comes to engaging with the public and managing a social media presence as a public official, one thing is true. If you fail to plan, you are inadvertently planning to fail. Why, you might ask? Because there is so much to consider, and as a private citizen, you simply don’t know what you don’t know. Even the staff of some who have held office previously still struggle with how to handle the continuously evolving legal issues associated with social media. There are so many issues and scenarios to contend with that private Facebook groups filled with those responsible for social media for government agencies exist, serving as pseudo support systems and Dear Abby’s of sort for people trying to do this work.

Today, most people are already using social media in some capacity before they decide to run for office. They may have a personal Facebook, Instagram or Twitter account but never gave much thought to their content one day becoming a public record, even on those personal accounts they believed to be protected by privacy settings. And yes, that can actually happen.

What Changes with Social Media Once you Get Elected?

But understanding the fact that certain content you post on certain channels can become public record is only scratching the surface. It is much more nuanced than that with a myriad of contributing factors and the outcome can depend on your agency, the office you hold, your state, your county and even your specific municipality. There is no one-size-fits-all rule book for public officials and social media nor is there a perfect checklist by which to ensure compliance for all. But there are best practices and case studies from which you can learn, many of which were showcased in a recent webinar from ArchiveSocial: Social Media for Elected Officials: What’s personal and what’s public.

This is a critical topic indeed, that must be top of mind for all elected officials, and one that is much better to grasp sooner than later.
Consider this: Before running for office, it is highly likely that a potential candidate never gave much, if any thought to public records laws or the Freedom of Information Act, also known as FOIA, which deem a great deal of information as part of the public domain, meaning it is available to anyone who requests it. And once you are a public official and/or part of a government agency, you are very much involved in and part of the public domain – social media not excluded.

That means your social media presence is no longer a private affair and certain actions may have consequences. You are now subject to rules and laws and charged with protecting your agency, promoting transparency and carrying a slew of responsibilities on your shoulders. And it never ends.

I worked in several newsrooms across the state of Florida from 1998-2007 and I’m very familiar with the Sunshine Law which requires that public agencies preserve public records, but during my time in the Sunshine State, social media wasn’t as sophisticated and mainstream as it is today. Now the Sunshine Law includes preservation of digital records created through social media and the Attorney General has specific guidelines outlining what kinds of records are subject to the Public Records Act. Cities and municipalities across not only the state but the country have social media policies, and it’s all very nuanced.

However, as overwhelming and maybe even problematic as all of this may sound, there are some things that are absolutely within your control: How you prepare, which has everything to do with learning the laws governing your municipality as well as delving into best practices and learning from those who’ve ‘been there done that,’ and how you transition from candidate to official, which is a core component of the webinar mentioned above. Putting the right tools in your toolbox to prepare for that shift in advance is table stakes. So find an hour on your calendar to watch the replay. You’ll be glad you did.

Looking for a deeper dive? Check out these related resources: