Don’t Feed the Trolls: When Internet Trolls Make it Personal 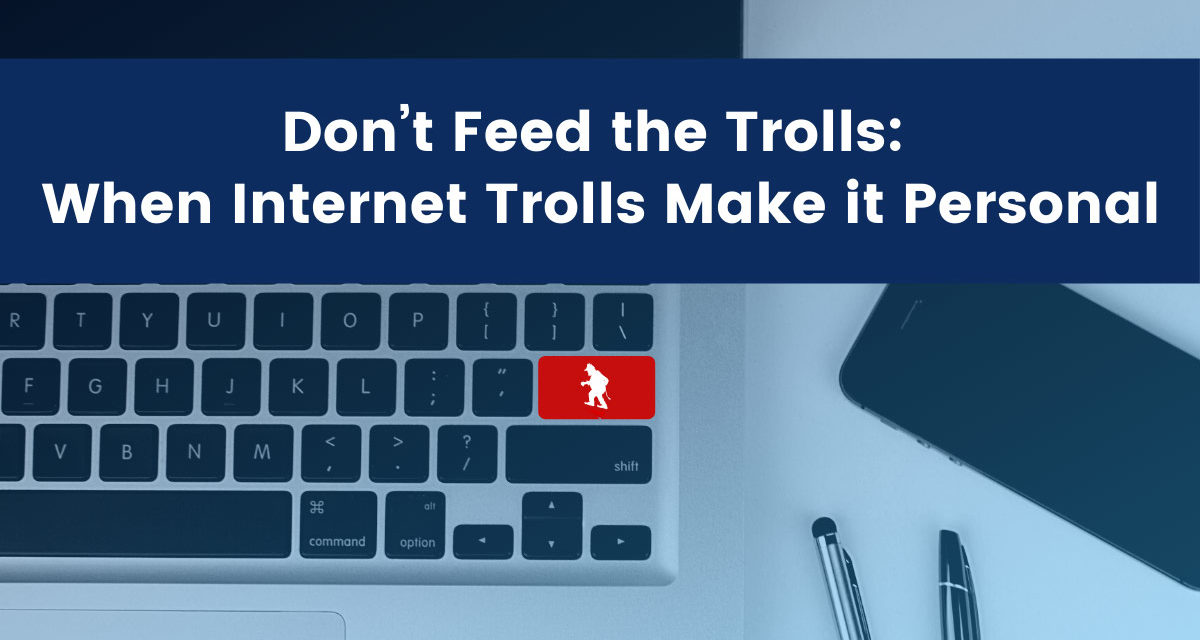 I have a long complicated history with online trolls. As someone who was managing and growing online communities in the early days, dating back to 2007, I had a front row seat to the ugliness that could emerge behind a keyboard and underneath the cloak of anonymity.

I certainly was not alone, and even then knew of other community managers experiencing all kinds of abuse from users including name-calling, harassment and angry emails. It was something we discussed online and at conferences. A shared experience that allowed us to bond and connect in ways we couldn’t with our colleagues who didn’t work in the space.

It was then and it still is today. Trolls can make your life miserable, wreaking havoc in ways that leave you no choice but to get up and go for a walk or on the flip side, leave you completely immobile – sitting in your chair in sheer disbelief at what you’re seeing on the screen.

The truth is, when social media, online communities and dealing with the public in the comments is your full-time or even a portion of your full-time job, it can come with a tremendous amount of stress. A community manager of the once wildly popular photo sharing site and online community, Flickr characterized it as such, and I couldn’t agree more: “Being a community manager is like being a piñata. People beat you with sticks and you still have to give them candy.”

That may have made you laugh, and if you are a social media manager you are undoubtedly laughing in agreement, because it is 100% spot on.

I know I’ve had many days where it felt like I’d been beaten with sticks after moderating comments, removing posts, dealing with back and forth among users, breaking up squabbles, replying to emails claiming bias, posts about unfairness and trying to get a handle on a banned user who wouldn’t stop creating new accounts. The list is endless.

For the most part you learn to deal with it as it comes. I’m not saying it gets easy, only that you learn to deal with it. But every once in a while, you can find yourself dealing with something awful, that takes you down a new path or makes the hair stand up on the back of your neck. It’s that ugliness shielded under the cloak of anonymity I referenced earlier. And when you’re the face of the organization or brand, it can get personal fast. What I’m saying here is sometimes a troll makes it all about you, the person responsible for the community or growing the platform/channel. You become the target.

For me, it happened on October 3, 2008. I remember because it was my oldest daughter’s 8th birthday, and also I wrote about it on my personal blog. Here is what I wrote:

Today I received an email from a user who called me the “n-word.” But it wasn’t just the n-word. After that, came the “b-word.” I guess she was trying to kill two birds with one stone. I am not blogging about this for sympathy because I don’t need it. I don’t need it because I give her words no power.

I’m blogging about this because it further indicates how far people will go under the cloak of anonymity. It also gives me the fuel to keep building my community because there are people out there, like this woman (who is masquerading as a man in the email) who desperately want to see it fail and live to wreak havoc on the members who make it a good place.Am I a little miffed? Somewhat. But, I’m more annoyed than anything. That isn’t something you expect to have to deal with or see, particularly in the workplace. But, life goes on, and I’ll continue to do what I do, and do it well.”

Now, I must admit reading that post 12 years later sounds as though I was very level-headed, and I suppose that’s a good thing. But I do remember reading that email in the moment and freezing at the n-word. I had never had anything like that happen to me in my life. No one had ever called me that to my face, or written it to me on a note or electronically for that matter, and I was 36-years-old at the time.

I remember being mad at myself for a fleeting moment for being comfortable enough to even share pictures of myself and my family in the community as a participant so that anyone would even know my race to decide to hurl racial epithets my way. Then I decided to question myself for even moving to North Carolina at all, as I’d just moved my family there the year before. “What was I thinking moving to the South,” I’d thought. But I snapped out of it and realized this person’s ignorance had nothing to do with my choices about where I moved my family or how many pictures I decided to post in an image gallery showing our lovely brown faces.
She was simply a troll, and troll is what they do best. They intentionally agonize, offend, disrupt and provoke. And I wasn’t giving her what she came for.

But here’s the very best part of this story. When I shared what happened on my own blog, my community showed up big for me in the comments. They posted words of encouragement, spoke out against personal attacks, denigrated the user’s behavior, shared stories about what was happening in their respective communities and forums, linked to my blog from theirs starting new conversations about the prevalence of such issues, and I even remember one person writing a whole piece about what he called cyber-bigots. One commenter who wrote about the importance of having a thick skin as a moderator admitted to keeping a private blog where he would just vent and type out his feelings when the going got rough. Talk about full circle.

While a troll in the community I managed came after me full throttle with the intent of tearing me down, the support of my own community lifted me right up. There is real power in this work!

For those of you who may be fairly new, or just haven’t been in the social media or community management space for as long as I have, I do wish I could tell you the trolls are close to retiring, but that’s just not the case because they never grow old. And unfortunately, there may come a time when one of them makes it personal for you. You have no control over that, but 100% control over your response. So don’t feed them.

Interested in more information on tackling online trolls? Check out these helpful resources: